Ordinary Magic Promises I Kept to my Mother Through Life, Illness, and a Very Long Walk

Cameron Powell describes the delicious as well as the sadder moments that comprise life as ordinary magic. His story has a magical draw that I think my readers will enjoy.

Are you planning to walk the Camino de Santiago?

Several of my friends have added this famous walk to their bucket list. I have not, but I’ve contemplated going with them. If you are considering the journey, PLEASE read this book first, Ordinary Magic: Promises I Kept to My Mother Through Life, Illness, and a Very Long Walk on the Camino de Santiago. I think now that I had better be committed and really WANT to go.

The Impact of Travel on Dynamic People

Cameron Powell’s mother wanted to go on the 500-mile-walk on the Camino de Santiago even though she had cancer. He agreed to go with her even though he didn’t always get along with her perfectly. (What adult child ever gets along perfectly with his or her parent?) As he describes their experience on the Camino, he shares the fascinating story of his life with his mother including the reason she changed his name. Powell’s powerful tale reminded me of my friend Chuck’s memoir, April in Paris Rendezvous with my mother, a tumultuous relationship with his mother, and a trip to Paris.

I highlighted tons of his descriptions and a few things I thought was funny because I am so bad at writing them. Here are a few I chose.

“I could have swallowed the moon.” (after he survived his divorce) 15%

“…an accent as sturdy as the stone of a Spanish villa.” (described his new friend Julio)

“We have arrived in St.-Jean-Pied-de-Port, henceforth “St. Jean” so as to ration our hyphens for the rest of the trip.” 20%

“Pilgrims crinkle plastic bottles while they whisper, stomp around in their boots (while whispering), or even call out to their fellows in the next bunk in the sort of library voice that would be most appropriate if one were in a library to which one had accidentally set fire.” 26% (Can’t picture sleeping in a room of strangers along the road? This did it for me.)

Eventually, I quit highlighting every few words that were funny or well phrased and immersed myself in the book. Cameron went through what many people in their forties to sixties endure, taking care of parents or being with them towards the end of their life. I could identify with his experiences, both the good, the sad, and the hard to write.

The final part of his book was filled with pictures of the people you met on the journey through his life with his mother. It felt like sitting on the couch with your best friend looking at the pictures of their family after you’d heard them talk about the folks for years.

I think you will enjoy this book. 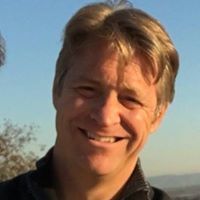 “Cameron Powell is a writer, six-time startup entrepreneur, consultant and coach, a largely repentant lawyer, and a semi-pro karaokist. Once upon a time, as a young lawyer, he got to say “Your honor, I represent the United States.” In early childhood pictures, there is evidence of his mother committing lederhosen. He is a graduate of the University of Colorado at Boulder and Harvard Law School. A rugged indoorsman, he nevertheless spent the last five years skiing and hiking around Telluride and Boulder, Colorado, and he’s now chosen to live in San Francisco.” Goodreads