How Do You Say,”Thank You So Much” to a Whole Town?

Winning an Award Is Not All About The Winners

2017 Woodlake Awards Banquet BTW, that was my expression when Tony told me I had to get off the stage or be carried off!

Award ceremonies honor the organization or community that gives them. If newspapers come to cover the event the organization or city gets some free publicity. People come to celebrate. They meet and greet make new friends and hug old ones. Excitement fills the room and spills outside as guests enter and leave. Normally I take pictures of it. This year I did not.

Suppose for a second that no one gave awards. Do you think the movie industry would be so noticed if it did not honor its own? People would go to movies – maybe. But they might not choose La La Land. Now they might! 🙂 Awards matter to the organizations that give them.

It thrilled me to see local papers cover the Woodlake Award’s Ceremony. One of the reporters said that it was the best ceremony in the area. Why? There’s a real family feeling in the community.

A community that pulls an awards event together elevates everyone, the City of Woodlake and all the community organizations that work so hard together to make it a great place to live and work.

The awardees walk a narrow line.

Woodlake honored me. Wow! I am humbled. Honorees walk a thin line between confidence and humility. Shy awardees suffer embarrassment from the attention. Even confident winners may have moments of awkwardness. (when they talk too long) For those who will be honored in the future, remember… 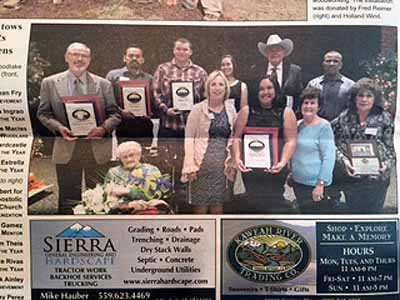 Did I forget my Award? Where was my mom when I needed her, anyway?

Award ceremonies are not just for the awardees. Organizations that do not honor their own do themselves a disservice. To downplay the recognition of the award dishonors the community that honors them Receiving an award validates the winner for a period of hard work and sacrifice. Someone noticed.

Of course, this brings up another issue!

What if there wasn’t anyone to award?

What if no organization would take on all the work of gathering all the certificates from commissioners, mayors, senators, assembly members, ordering the awards, raising money for the food, preparing the food and decorating for the event? Much more goes into event planning that the larger community realizes.

Next Year It Could Be You!

This is what happens to the awardees so you can be prepared next year when the nominating committee calls you.

When Sally Pace called me to tell me I was chosen as the Woodlake 2016 Woman of the Year, my first thought, was, “How in the world am I going to fill the tables?”

“Also, I need 24 pictures and you need to fill out all this information about yourself.”

There is an expectation that the awardees will fill the room with guests. Everyone brings his or her family to celebrate. My family consists of my husband Vince and his sister in our area. Vince’s son Jason lives five hours away, and my brother lives in Portland, OR, about 15 hours away.

I put out a call for help on Facebook! Come be my family! I bought tickets to fill two tables. Then a third. I worried that they might go vacant. I told all my close friends out of town, even called my brother. He couldn’t come.

The night came, the tables filled. My rock star friend, Elane Geller, a child Holocaust Survivor came from Los Angeles and our close friend, Andria Jacobs came from Las Vegas, NV to make sure I treated Elane well. (I’m kidding, Andria!) The whispers started among the guests, “Is that Elane Geller?” 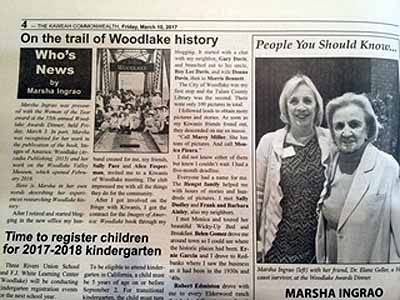 Marsha and Elane Geller (I’m on the left with my name tag on so I don’t forget who I am.)

They rushed over to greet her. They wanted pictures of her and themselves. Some of them included me, too. Tony Casares recognized her from the platform before the ceremony started. She received an ovation. Don’t ask me if they stood, I think my head had fuzzed shut by that time, but not from drinking. It just does that on me when I know I have to get in front of people.

My dear friend, Margaret Morris came from the coast. My step-son came. People came from TCOE where I worked for years including a former boss, Olga Cortez, a close colleague, Connie Smith, and two former support staff, (my pretend kids) Ivette Lopez and Paula Terrill, all of whom I love dearly.

My neighbors came. People who helped me with the Woodlake book came so I could talk about them in front of their faces instead of behind their backs. I worried about how to seat people. I didn’t need to.

No one edited my paperwork, I’m sure. They read the WHOLE thing! When will I ever learn? When I’m home alone with my computer, I think it’s a diary. Before I even reached the stage, I’d already been going on too long.

I wanted to tell the story about Robert Edmiston dusting me off after I fell out of the car when he showed me around Elderwood. The emcee, Tony Casares chased me off the stage before I could.

I wanted to thank my husband for supporting me so much while I’ve been busy doing all the stuff I love to do. He got up and left the room before I spoke. I forgot! Then I saw him standing in the back. Tony kept swooshing his hands to get me off the stage.

Vince got an apology look across a crowded room. I think he understood.

Someone told Linda LaFleur, Kiwanis President, that the only bad thing about the ceremony was that some of the awardees spoke too long. Anyone know where there’s a good hole?

Did you think it would end that night? Not at all. A couple of reporters called me. One gave me homework. One took a great picture of me and put it on the front page of his newspaper. I finally changed my three-year-old Facebook profile picture.

My former boss, Jim Vidak sent me a letter of congratulations with lots of personal marks on it. Go TCOE! My friend, Monica Pizura collected papers for me and brought me cute gifts. Connie brought me wine, and Connie doesn’t drink wine.

Last year’s awardee donated all the meat for this year’s banquet. She’s shy and I don’t think she wanted that information told. Yes, shy people get awards!

Get prepared, Woodlake Chamber Member, General Food Store, I’m going to need to buy a lot of meat next year. And the rest of you be thinking of who to nominate next year! 🙂

Want to receive more stories about Woodlake? Sign up for my newsletter.