Chapter Five Has The Transmission Come Yet? 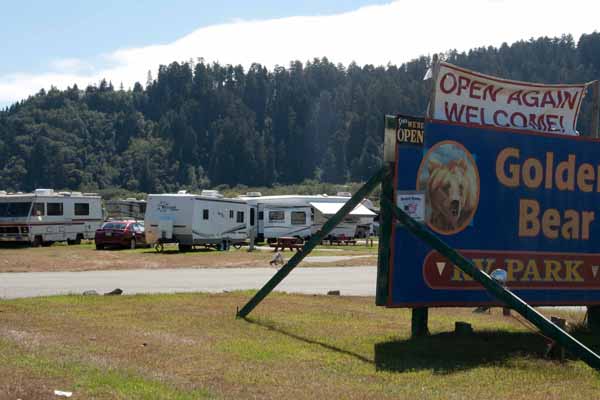 Vince remained in his Twilight Zone of Optimism for several more days after the truck’s transmission lost everything but first gear and reverse.  The sun shone into their little palace on wheels early on Sunday morning.  Vince was ready with activities before Marsha awoke.  He scoped out Crescent City the night before when he went there to get the rental car.  Only sixteen miles north of Klamath, it bustled with history, restaurants, and best of all, internet and cellular service.  He knew Marsha would appreciate that.

The smell of fresh coffee and rays of sunlight drove Marsha from her warm bed.  “Let’s go to Crescent City today,” Vince announced still in his cheery mode.  There are lots of things to do, and I want to take you to breakfast.”

“That sounds good.  Do you want to go check on your truck?”

Vince was the kind of guy that checked and double-checked everything.  He checked the bank account balance several times a day to make sure it hadn’t been hacked.  He asked Marsha about every check.  Then he checked the credit card account, and asked Marsha about each charge.  Every day he checked the pool, swept it, skimmed it, put chemicals in it.  Before every swim, or just when he happened to go out and see a flower bud floating across the surface, he cleaned it again.  Marsha knew he would want to go up to Crescent City to see if his truck was still sitting safely in the lot at the GMC dealer.  He did.

“There’s a famous lighthouse here,” he told her after they finished a delicious breakfast.  “How is it that she doesn’t weigh 600 pounds?” Vince thought to himself as he watched her clean her plate making sure to wipe away every trace of cream cheese frosting drizzled on the blueberry pancakes.  “Good thing.  A woman can never be too skinny or too rich.  She’s pretty well maintained for 61,” he continued musing.

“You look so pretty,” he voiced his thoughts a little more flatteringly.  “My beautiful wife.  I love you sweetie.”

“I love you too,” she answered as she always did.  They had their rituals.  Just like when Vince’s son called and they were ready to hang up, Vince never hung up without saying, “Here’s a hug,” and making a little hug sound over the phone. 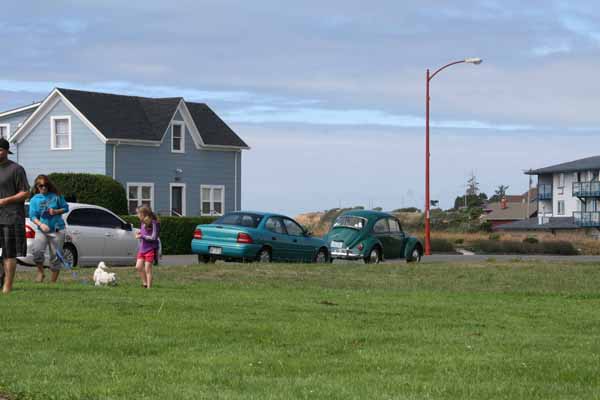 Battery Park was huge, but not nearly as interesting as the jetty, pier and the lighthouse.  Both camera bugs took pictures of the lighthouse on top of the hill.  To reach it people crossed over the rocks, a stepping bridge across the mouth of a stream flowing into the ocean.

“I won’t let you fall, Puppy. Hold on tight to my arm,”  the wind blew her words out to sea past PG’s outstretched, listening ear.

“Do you want to go across?”  she asked, not feeling overly adventurous.

“No, you need high boots unless you are prepared to get wet.  Do you want to get wet?”

Marsha knew he had her there.  It wasn’t that she minded getting wet.  In fact, she loved it.  But what other activities did Vince have planned? This was a rare occasion, and she didn’t want to ruin it by getting wet and wanting to go change.

Remembering one time she had gone kayaking in Monterey Bay with friends from work, Marsha hesitated.  Even though they wore wetsuits, she experienced soaking wet shoes.  Not realizing that the boat would let in water, she wore her only pair of shoes into the boat.  Bare feet, being more comfortable than sloshy shoes, Marsha removed her shoes after she gracefully landed the boat and literally rolled over in the surf a few times getting out of it.  The group wanted to go eat after their strenuous excursion.  She had put her wet shoes in the car, but the eatery clearly stated, “No shoes, no shirt, no service.”  Her boss shielded her as she scooted through the door shoeless.  That memory cautioned her.

“No, thanks,” she answered after giving the idea some thought.  Although the hill and house called her, she resisted.  Let’s walk out on the jetty.”

“DANGER: Deadly waves at any time. Jetty unsafe for walking.”

“It says it’s dangerous at all times.  Do you want PG to be swept away by an ocean wave?”

“Don’t let go, Mom. That looks like water down there.” PG’s thoughts were a clear as if she actually uttered them.

Visions of whether she would let go of the leash and lose PG or be swept out to sea with her aquaphobic doggie kept her moving away from the jetty towards the safer boardwalk.  A young couple with their two dogs joined them on the boardwalk.  One dog was a huge pit bull, the other a terrier, smaller than PG’s slight 9 pounds, pranced side-by-side looking like Mutt and Jeff. 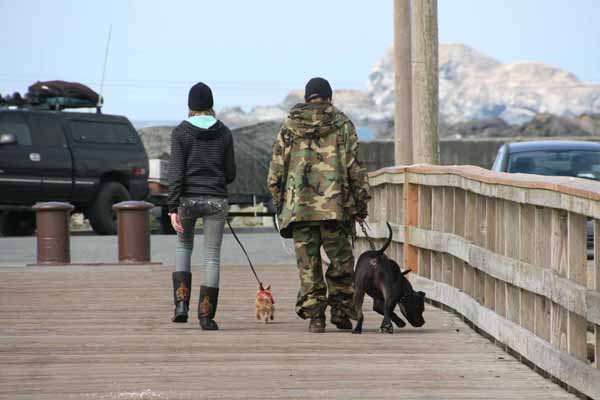 Fisher people with their empty poles dotted the boardwalk.  A couple from Medford, Oregon escaped the 100 degree heat to catch crabs in the bay.  Several huge crustaceans lounged unsuspectingly in their blue plastic bucket.

Soon it was time to leave.  There was lots to do, and they still wanted to see the Trees of Mystery.  They wound their way through the Redwood Highway back towards Klamath towards the mysterious trees where yet another adventure awaited them. 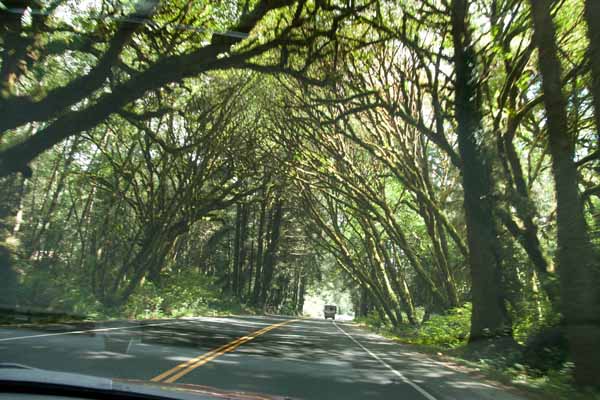 Work would start on the truck tomorrow.  Or would it?  Stay tuned.

Does your dog or pet have any phobias?  How about you?