One of my friends, a world history teacher, told me that he adored Catherine II, the Great.  I wondered if there was more to her than the sordid rumors I had heard.  I downloaded the Memoirs of Catherine the Great from Amazon, and found a complex young woman. 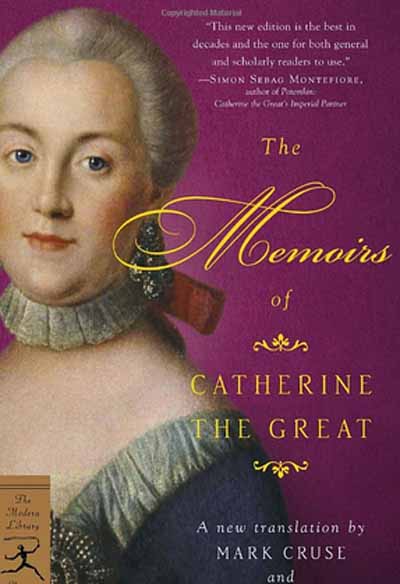 In the 18th and nineteenth centuries Russian nobility was a very small portion of the population.  Nobility world-wide was beginning to lose prestige.  As Catherine  the Great wrote her memoirs, French King, Louis XIV lost his head, and Americans elected their first President.  In Russia the Table of Ranks still ruled, and at its head, the powerful Empress, Catherine II.

Most memorable to me was how little control Catherine (Sophie) had over her circumstances during the 20 year reign of Elizabeth, daughter of Peter I.  I saw a young woman who had a very structured, difficult and very political life.   She lived by rules, one of which included,  “Be merry, but neither damage nor break anything, nor gnaw on anything.”  She  presented herself as dutiful and humble.

Even though she wanted to be remembered as wise and just, her memoirs do not hold back information that she had several affairs, nor that her children were removed from her care immediately upon birth.  Her most dangerous year began on Christmas day, 1761 with the death of Empress Elizabeth I.  Her husband, Peter III became Emperor.  She was pregnant by Count Grigory Orlov, and faced possible arrest, exile or death.  Peter III stated, “God knows where my wife gets her pregnancies. I really do not know if this child is mine and I ought to recognize it.”  Instead, he planned to install his mistress, Elizabeth Vorontsova, as his consort.  Catherine seized the throne, and declared herself Empress Catherine II.  Members of her political friends murdered her husband, and she took charge and ruled until 1796 when she died in the bathroom at age 67.  Rumors vary about how that happened.  None of the rumors are pretty.  I particularly wonder how anyone, even a promiscuos sixty-seven year old empress, could attempt to have a sexual encounter with a stallion.

The Preface to her memoirs called her a “graphomaniac”, meaning that she wrote unceasingly about herself, from the time she was 14 until she was 67, completing 700 pages about her life.  Her writing helped her understand herself, and her role in making history.  She also used her memoirs to influence future readers to recognize her justifiable place in history.

I identify with her graphomania and even the reasons for it as I sit here blog, blog, blogging, making history in 2013.  In reading more about Catherine the Great, I begin to understand my friend’s fascination with her life and contribution to Russian and world history.