Before I start my book review, which I promised you last week, I want to thank you for responding to my poll yesterday.  I will be establishing a posting schedule in a few days based on your advice. 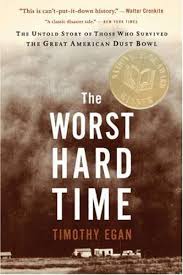 Attention English teachers!!!  The Worst Hard Time:  The Untold Story of Those Who Survived the Great American Dust Bowl by Timothy Egan reads almost like fiction. History and science teachers join forces by using this book as primary source background information to introduce or expand the topics including the Dust Bowl and the environment.

Hundreds of thousands of people fled to Arizona and California to escape the worst natural disaster in modern times.  This book focuses on those who stayed, and lived in wooden shacks with no insulation to keep out the dust.

You will experience the emotional debates raging in the hearts of the hanger ons when their lives blew away.

“In those cedar posts and collapsed homes is the story of this place:  how the greatest grassland in the world was turned inside out, how the crust blew away, raged up in the sky and showered down a suffocating blackness off and on for most of a decade.” p. 2

This book includes shocking facts beside the tragic stories of the nesters who had obeyed their government, farmed the land, and reaped a bowl of dust.

“…Black Sunday, April 14, 1935, … the storm carried twice as much dirt as was dug out of the earth to create the Panama Canal.  … More than 300,000 tons of Great Plains topsoil was airborne that day. … Jeanne Clark could not stop coughing.  … The doctor diagnosed Jeanne with dust pneumonia, … she might not live long….  Jeanne’s mother… had come here for the air, and now her little girl was dying of it.” p.8

The “great plowup” of millions of acres lasted only thirty years, but the consequences lasted a decade at its worst, and continues today with a cautionary tale for the future.

“The land came through the 1930s deeply scarred and forever changed, but in places it healed. … After more than sixty-five years, some of the land is still sterile, and drifting. … The (nearly 220 million) trees from Franklin Roosevelt’s big arbor dream have mostly disappeared.  … When the regular rain returned in the 1940s and wheat prices shot up, farmers ripped out the shelter belt trees to plant grain.” pgs 309-310

What is frightening after reading this book is the realization that it could happen again, and this time there would be no remedy.

“The government props up the heartland, ensuring that the most politically connected farms will remain profitable. …  To keep agribusiness going a vast infrastructure of pumps and pipes reaches deep into the Ogallala Aquifer, the nation’s biggest source of underground freshwater, drawing the water down eight times faster than nature can refill it. … It provides about 30 percent of the irrigation water in the United States.”  p. 310

This book is guaranteed to make you more aware of the extreme dangers of continuing in the direction we are going as a nation with regards to what and how we grow.

In Central California where I live, the subject is especially poignant for two reasons:

I recommend this book for use in Common Core classrooms grades 5 and up.  It covers science as well as social studies topics as it combines environmental issues with historical facts.

Please rate this review.  Thanks  🙂